grabbed this T in the craft section of Walmart to use as a “painting shirt”. I was amped when I saw it was Gildan. I LOVE the Gildan brand…I have a few sweatshirts of theirs and they’ve lasted longer than any other. Tons of washes and years later…they’re still my favorite. So I knew this T would last through lots of abuse (aka crafting with a toddler).

got home, put it on and realized it was going to be SO MUCH MORE THAN THAT.

A good, classic T is hard to come by and this one is incredible. The shape/length is perfect, the sleeves are a good shape and not too long, it doesn’t stretch out and washes/dries like a dream. It’s not too thin, so it’s not clingy or see through. It holds it’s shape through an all day of wear (or a night of sleeping, or both TBH).

I’m 97% sure it’s THIS ONE. But haven’t been able to confirm with style numbers…so check out the pics, stop by your local Walmart, Michaels, or other craft store to see if they have them. They’re unisex (aka straight up and down — doesn’t have the weird slope-y cut out like any other basic ‘women’s’ t).

The biggest bonus being that instead of costing $300 like every other ‘really good’ tshirt i’ve seen lately…it only costs $2.97 (at walmart). NO JOKE

I’ve decided I like it best with the sleeves rolled up twice.

Considering cutting one off to create a crop top version…

Just basic, doing nothing to it:

My favorite look with this T (so far, in the 48 hours that i’ve owned it) is full on tucked-in to a pair of high waisted pants. Maybe not leggings…as seen below (but that’s what I had on at the moment and was too lazy to change my pants) 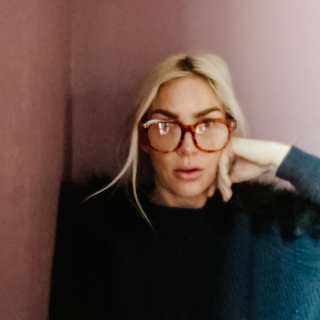